Now that St. Patrick’s Day is here, you’re probably cooking up the traditional corned beef and cabbage along with a some potatoes (if you’re not cooking up my Shepherd’s Pie, or Irish Nachos of course!). My wife is Irish so we’re usually doing at least 1 night of corned beef and always have some leftover.

But whats best way to get some use out of those leftovers? You could reheat it and have it for dinner the next night or turn them into corned beef hash with bacon! This makes a great dish on its own topped with an egg!

Or get a little fancy and add it into some scrambled eggs and wrap it in a tortilla for a breakfast burrito.

If you have time do the prep portion the night before I highly recommend it just to make the morning less of a hassle to cook this. Takes about 20-30 minutes to cook with prep time involved in the morning so if you’re trying to cook this for the family and work mornings, just keep this in mind!

The goal is to get a nice crisp to the corned beef and potatoes. Don’t do too much stirring otherwise the potatoes will just get mushy.

If you’re making a larger quantity than this recipe calls for, you’re going to want to cook the potatoes separately rather than cooking it all in one pan at once like I did. The reason being is if you throw too much food into a pan it’s not going to create too much steam and you don’t get the crisp to the potatoes that you will want for this recipe.

On to the recipe!! 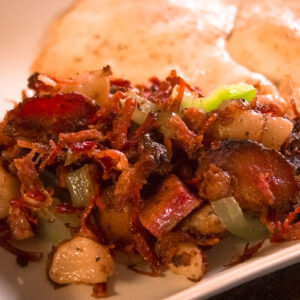 Corned Beef And Hash With Bacon