Quick and Easy Spanish Rice In The Rice Cooker

How To Clean And Care For A Cast Iron Skillet

I love my cast iron skillet. I’ll cook pretty much anything in it. It hold heat really well and once it’s broken in, doesn’t stick, and I don’t need to worry about about scratching off any non-stick coating. Cooking with it is amazing too! It is great for searing steaks, frying chicken, and it any dishes that require you to move from the stove to the oven can be done in one pan!

I have to admit, it took me a while to get used to the idea of cooking on a cast iron skillet, I was definitely intimidated by it. One of the biggest issues was I thought they were hard to clean and care for. But once I got used to how to cook on a skillet, I didn’t think much about cleaning. Yes, there is some extra steps you need to take to clean a cast iron skillet, but if you’re used to hand washing dishes, it honestly isn’t that bad.

When taking care of your skillet there’s a few things you want to keep in mind.

How To Clean and Re-season your Skillet

So I was bad to my skillet. Real bad.

After about a week of cooking bacon and other food in my skillet and not really cleaning plus letting it build a little rust I thought I’d go through how to clean it and get it back into shape. It’s actually a lot easier than you think!

My approach is similar to how I clean my grill grates. Get the grates hot, then let the heat do the work for me and let it all scrub off.

If I’m not immediately cleaning my skillet after I’m done cooking, I’ll get the skillet nice and hot again. In my opinion, this makes cleaning the skillet much easier. Similar to a grill when you need to clean the grates, the leftover fats and burnt junk will scrub off a lot quicker. 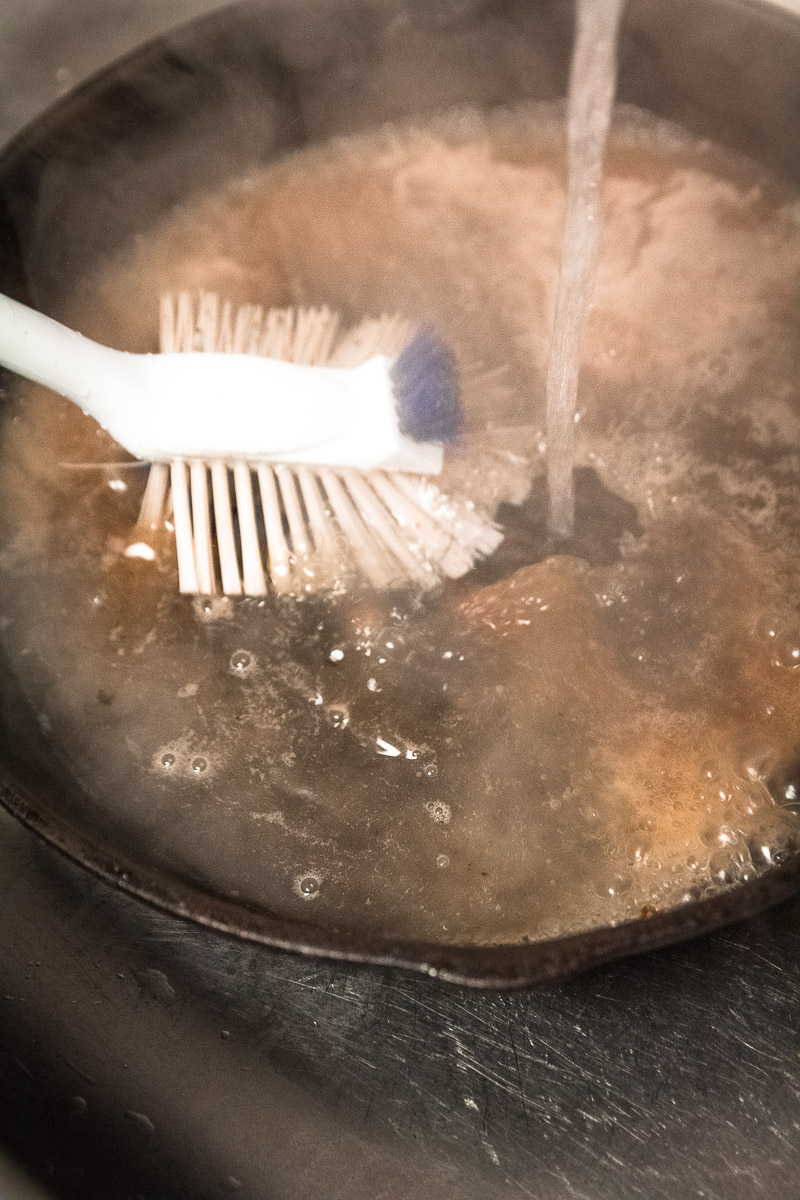 After about 5 minutes of heating on the stove top take your skillet under warm running water and begin scrubbing with a plastic brush. I’ll go in circular motions in one direction and then another. 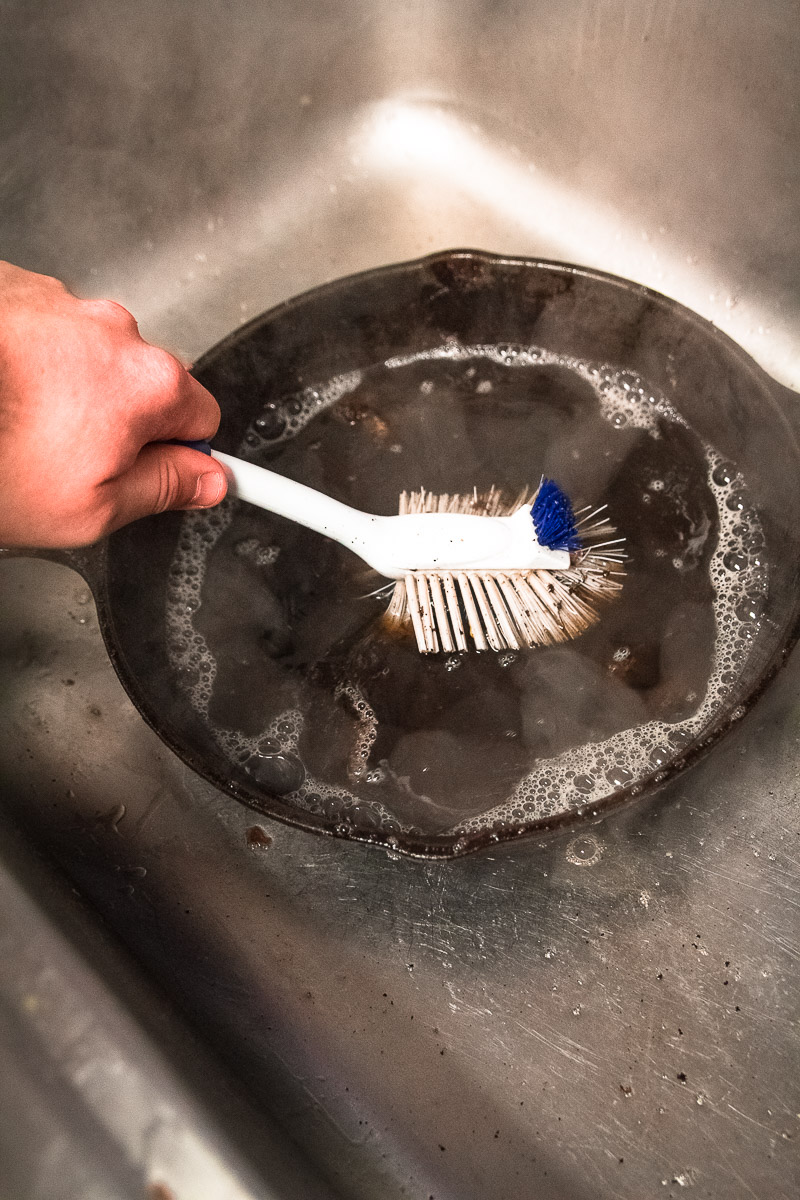 This step isn’t required, and I don’t do it every time and there’s some that consider this a cast iron sin. Of course there’s the debate that once the skillet gets to about 225 it will sterilize, but it doesn’t really hurt to give it a good clearning every now and then. I personally use soap every now and then to give it a deep cleaning and just for some reassurance that I’m not going to get the family sick.

If you decide to use soap, add a bit of soap and continue scrubbing. Depending on how dirty your pan is you may need to dump the water and repeat the process a few times. Use a mild dish soap and DON’T LET IS SOAK.

When the water runs clear off the skillet you’re done scrubbing. This shouldn’t take long, about 5 minutes tops.

Wipe your skillet with a clean towel and place it back on the stove and heat it back up on medium until all the remaining water evaporates. This will help keep any rust from forming. 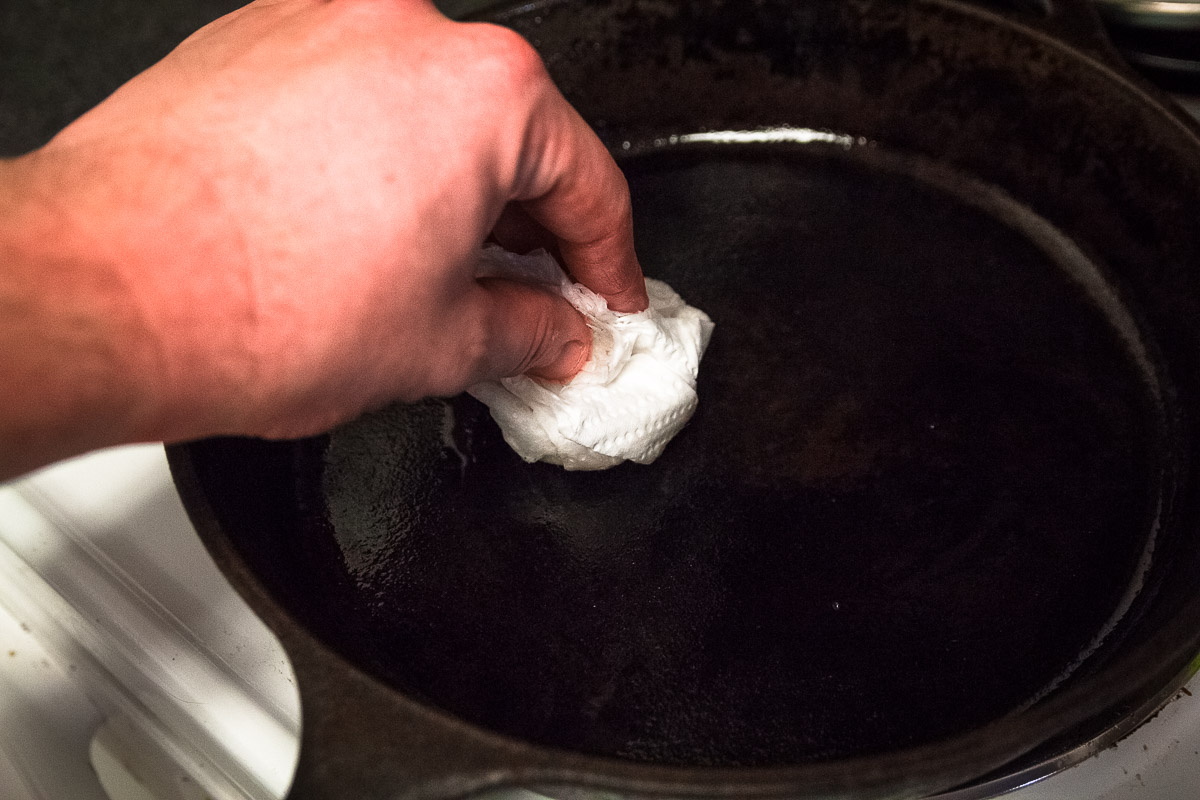 Once all the water is evaporated take some vegetable oil, shortening, or even some coconut oil and pour a little in the skillet. With A paper towel rub it into the skillet until it’s evenly coated. 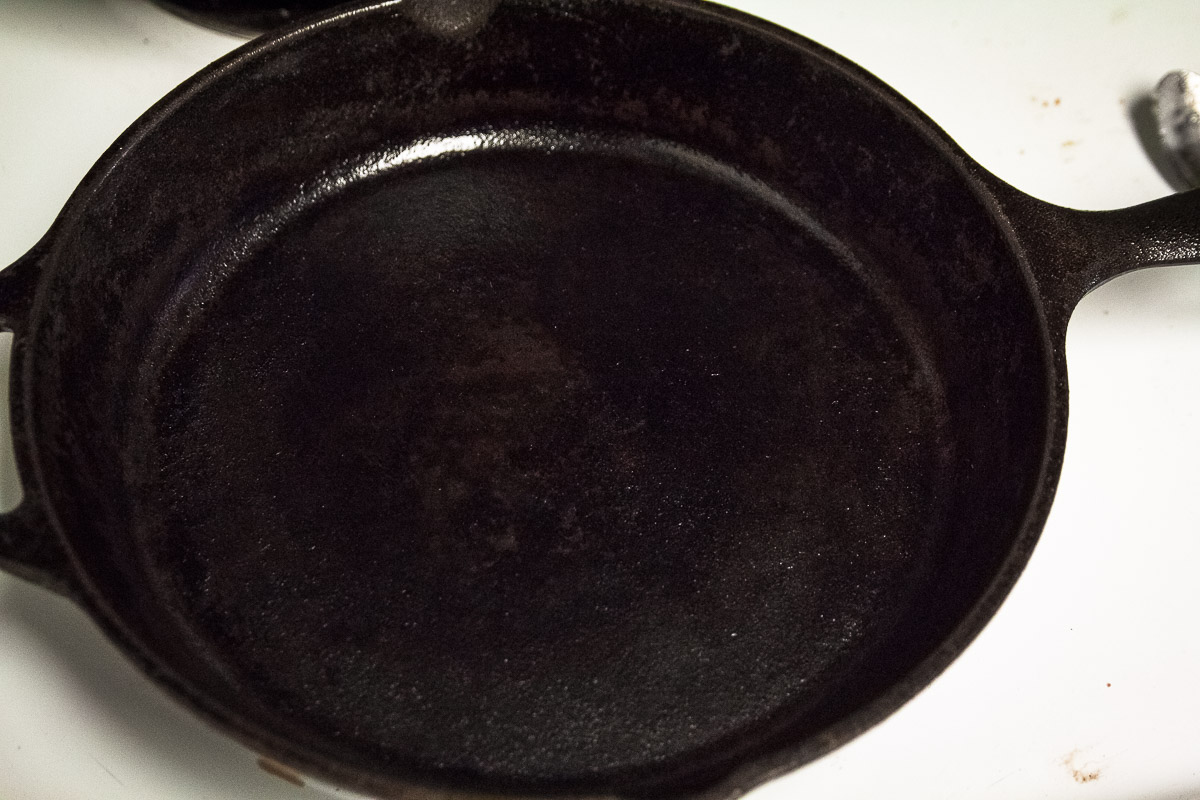 Let the Skillet sit on the stove top for about 10 minutes on medium.

If you’re re-seasoning place the skillet in the oven at 350°F for about an hour. Let it it cool and store in a dry place. 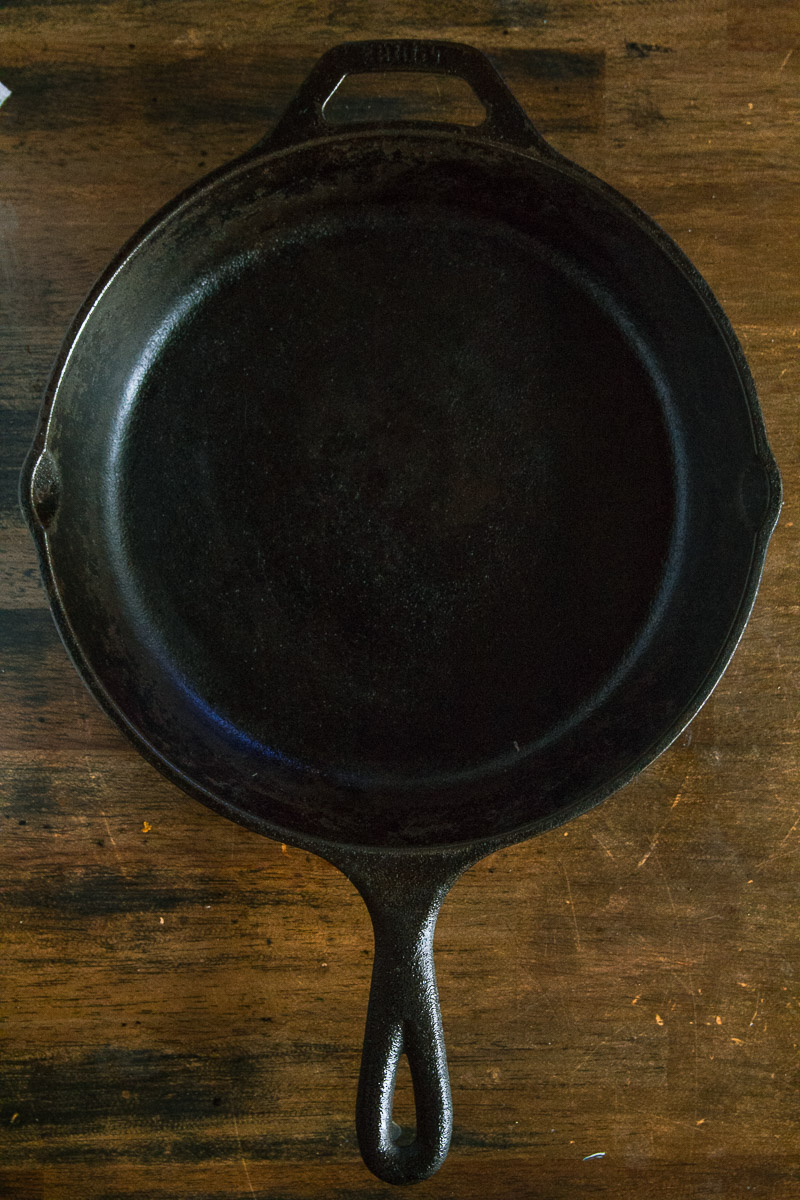 And that’s it! Once you get the hang of caring for your skillet, you’ll find that it really isn’t that hard and you’ll really the most out of your skillet. With proper care you’ll have a skillet that lasts your for years, even decades!

Do you have any tips that you’d like to share on how to clean and care for your skillet? Leave me a comment, I’d love to hear it!