Making breakfast sandwiches is one of my go to breakfast meals. Just throw and egg on some toasted bread, melt cheese, maybe top with a little spinach and bacon and done! Lately, I’ve really wanted to try out this hash brown in a waffle iron trend that’s been going around, and I couldn’t think of a better way to do it than making a breakfast sandwich out of this mornings veggie omelette! 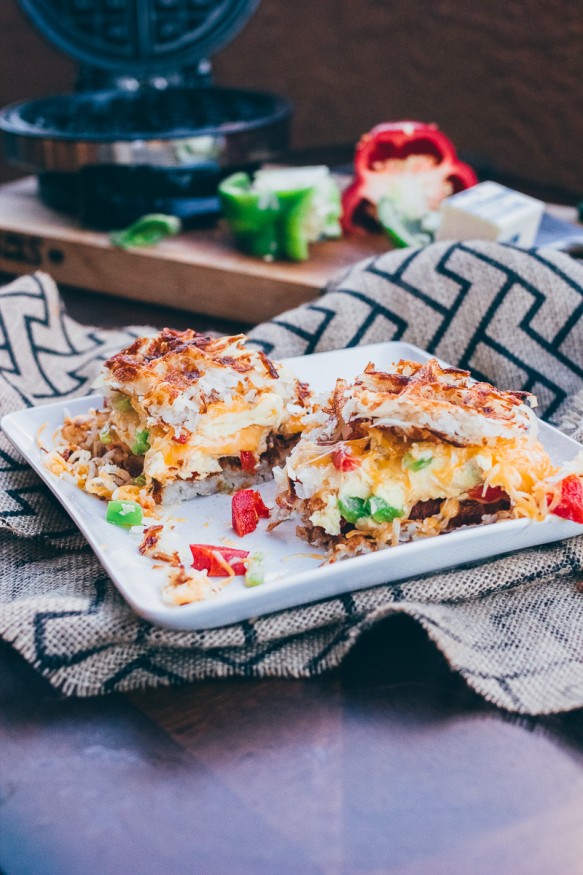 Omelettes were one of the first things I learned to cook in my high school cooking class way back when, and it still took me some time to get the hang of it. It takes some practice on making and flipping them over without sticking (something that sometimes still happens), but they’re really fun to make at home once you get the hang of it! Putting the omelette in between the waffle-griddle hash browns gave it a whole new twist that we really enjoyed! 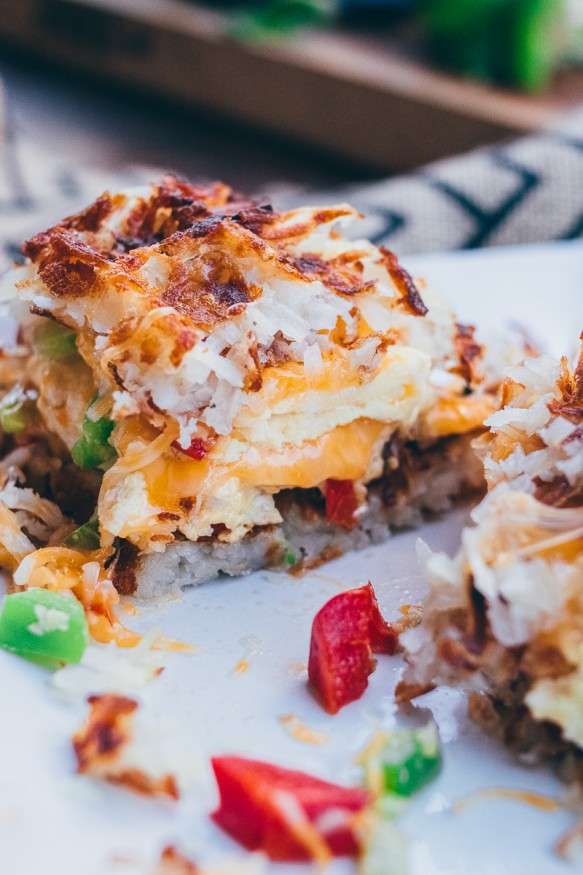 The hash browns cooked in a waffle griddle really simplifies the cooking process, you don’t have to flip them, just make sure the griddle is well oiled, and just let them cook while preparing the omelette. Once the hash browns are crisp and a beautiful golden brown, they really hold up to everything the omelette has to give it. I was honestly expecting having to fork and knife this “sandwich” but I had no problem picking it up with my hand and eating it without it falling apart! 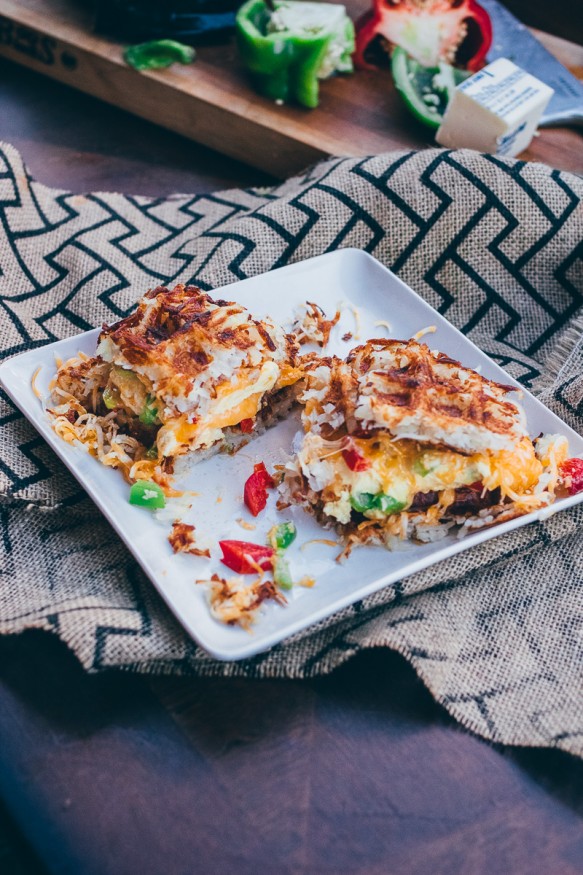 Prepare Hash Browns Ahead Of Time

If you’ve read my post on How To Cook Hash Browns, I give to ways to make them, My preferred is using precooked potatoes and grating them, and for this recipe I would suggest doing it this way, only takes minutes in the morning to grate potatoes, rather than soaking for 15 minutes so that they don’t turn out gummy. So next time you bake potatoes, throw some extra in there for the next day for this recipe!

I also recommend Idohoan’s packaged hashbrowns if you’re in a bind, just soak them in hot water for about 5-6 minutes and they’re ready to cook. 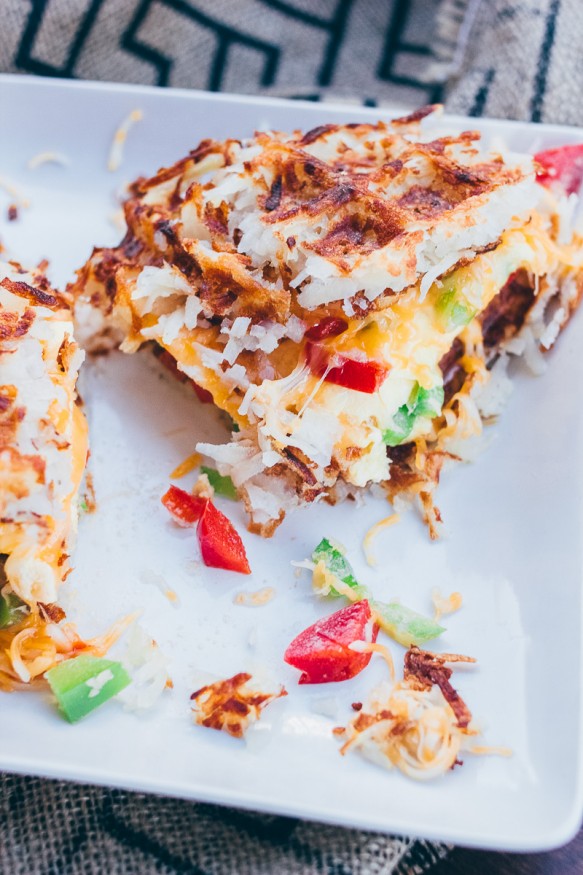 The trick to easily cooking an omelette is a good no-stick pan and a decent amount of butter. I cook my fillings in butter, then add the egg. If all goes well you can flip the whole thing in the pan without anything sticking. Sometimes it will stick and I suggest keeping a spatula nearby to make sure nothing is stuck to the pan so that you don’t break the whole omelette apart. Luckily for this recipe, it’s not as important. If you find your omelette fell apart, piece it back together, top it with cheese and the cheese melts and holds it all in place.

Besides, it’s going in this waffle sandwich and is going to be delicious. It will be devoured before anyone even notices! 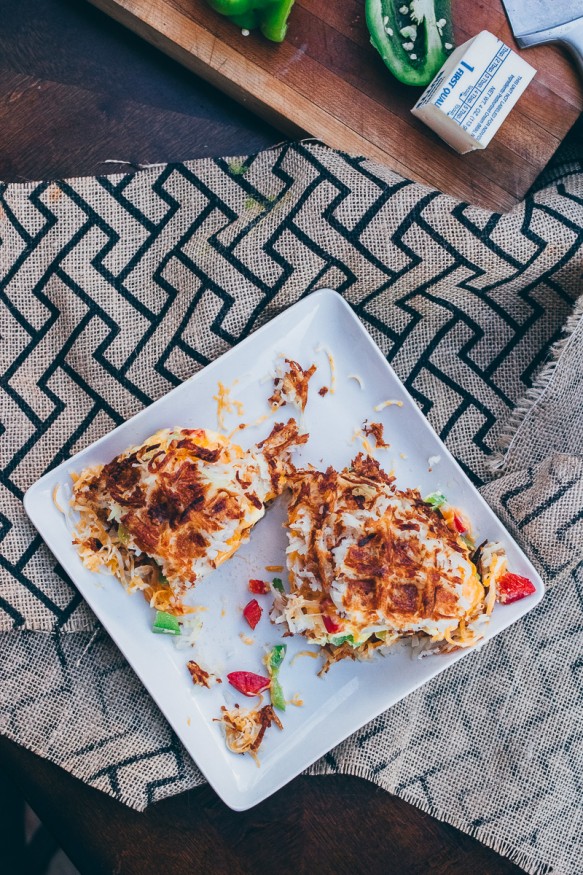 Note: this is pretty filling, so one half of this sandwich can feed 1 person.

Took some inspiration from chipotles latest menu a

Getting my daughter to help out in the kitchen is