A Land Before Time Movie Night With Zebra Popcorn

Man, yesterday was a weird one. Summer Solstice, full moon, record breaking heat (113 degrees and I’m 5 miles from the beach!), and our son was running a high fever for most of the day.

What better time to have a movie night in bed with some Zebra Popcorn and school our son on one of our childhood favorites – The Land Before Time. 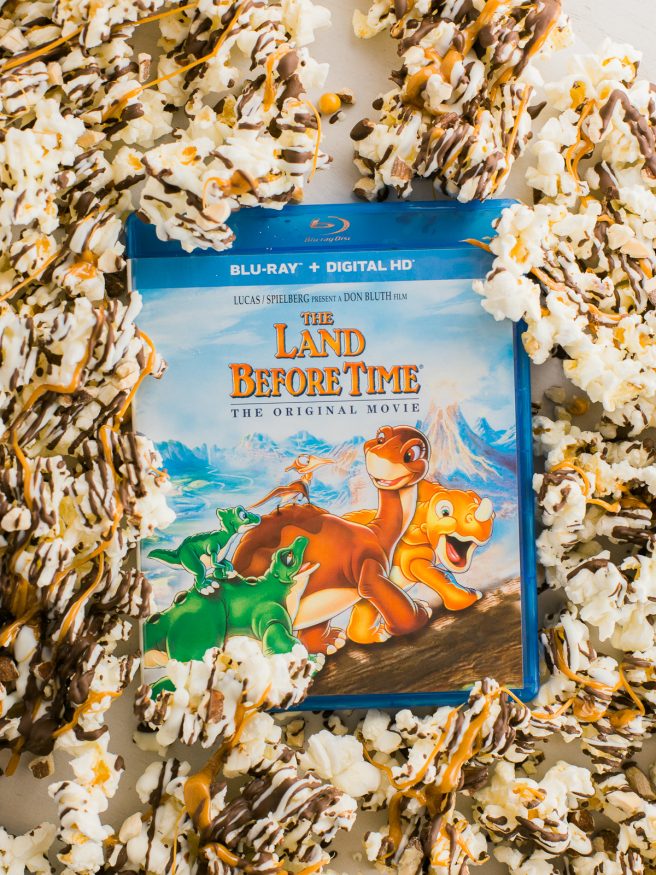 Our son, Brayden, has never really been sick – we’ve been really fortunate with that. But yesterday he woke up with a cough and had a fever for the majority of the day.

The funny part? You wouldn’t even have known he was running a fever if you didn’t take his temperature. 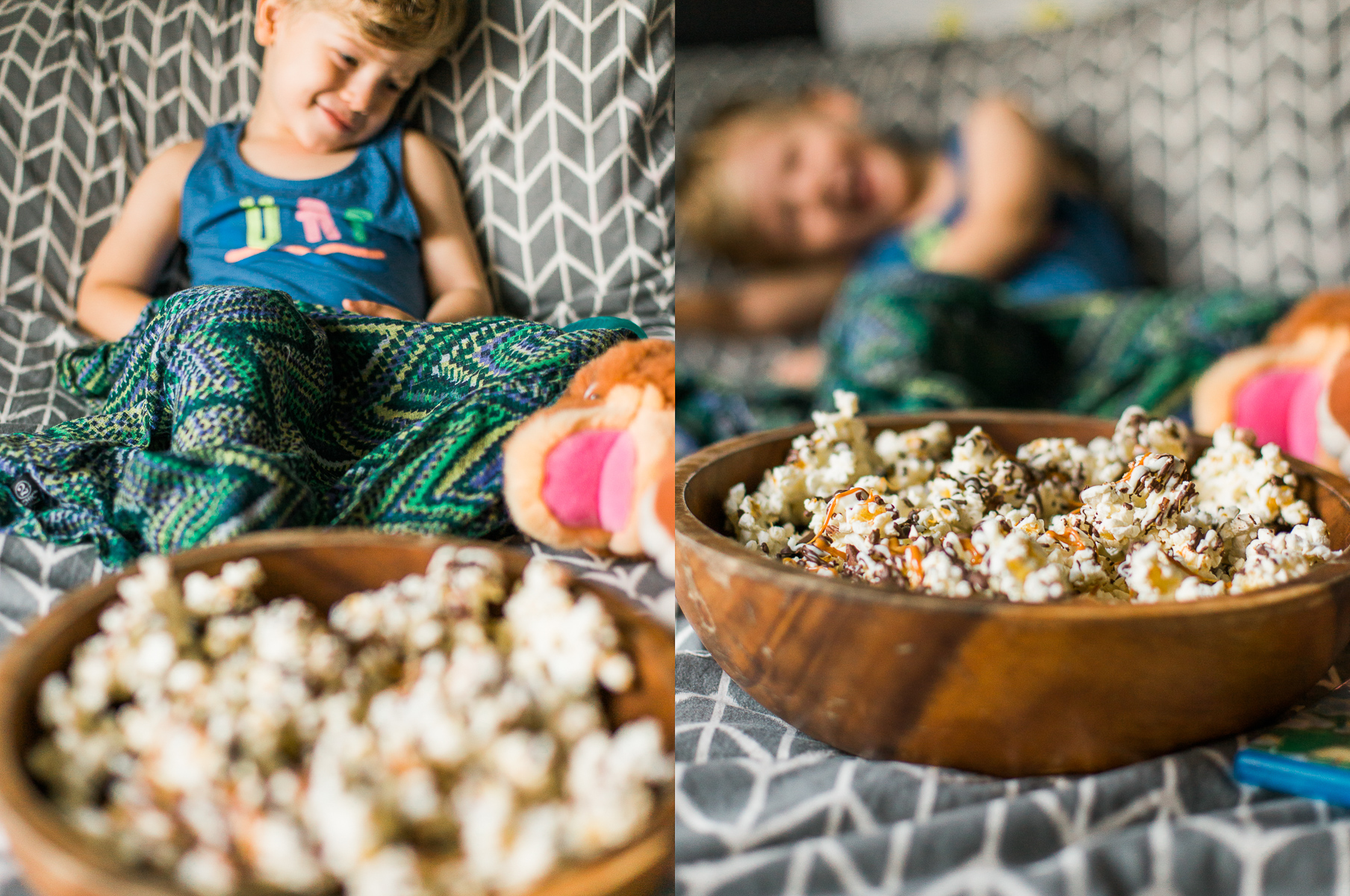 Don’t let the shot on the left fool you. He’s milking the “I’m Sick” thing for all its worth and thinks its hilarious… 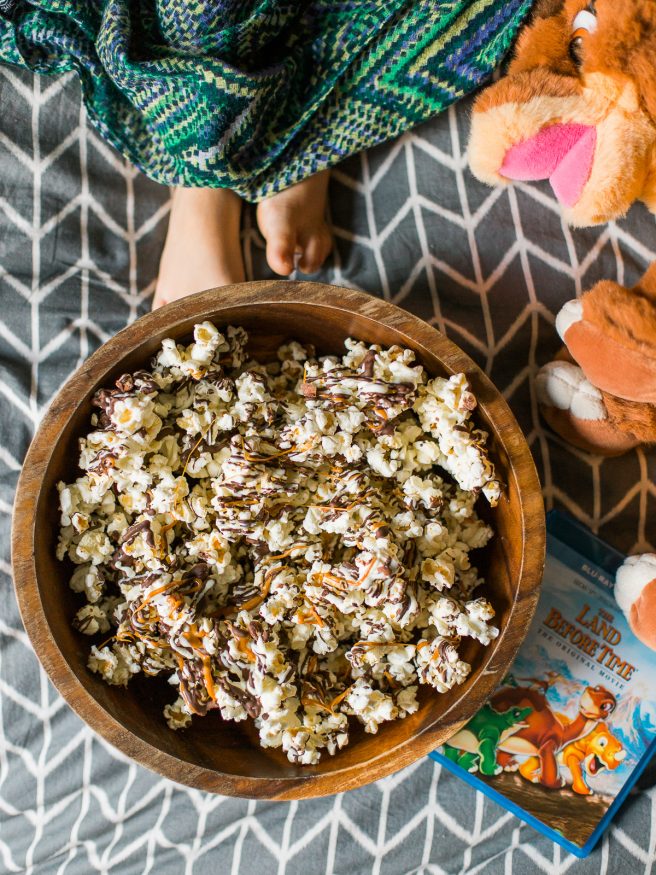 So after a long day in the heat, I ran to Walmart, picked up some sandwich supplies and Pop Secret Popcorn, along with the sweets to melt all over the popcorn!

Then I had to pick out The Land Before Time as our movie night pick. I get nostalgic, and Brayden likes dinosaurs. It’s  Win-Win!

I made us some quick sandwiches, because I was in NO mood to turn anything on in the kitchen that required a flame. Then got right to making the popcorn so we could get the movie night going since neither my son, nor my wife had any intention of leaving the bed. 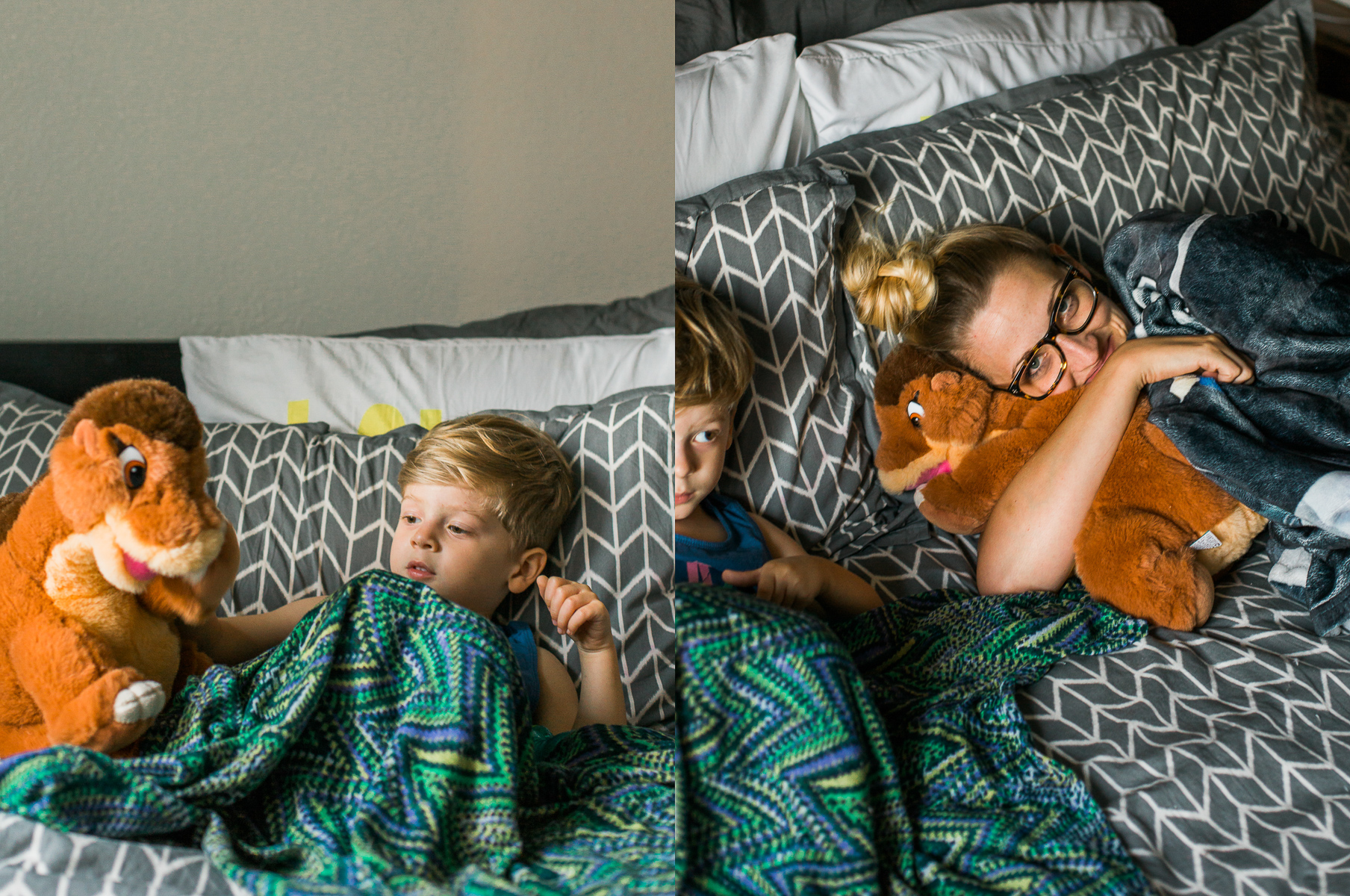 They just wanted to fight over who gets to cuddle with my wife’s Littlefoot stuffed animal she’s had since she was a child! 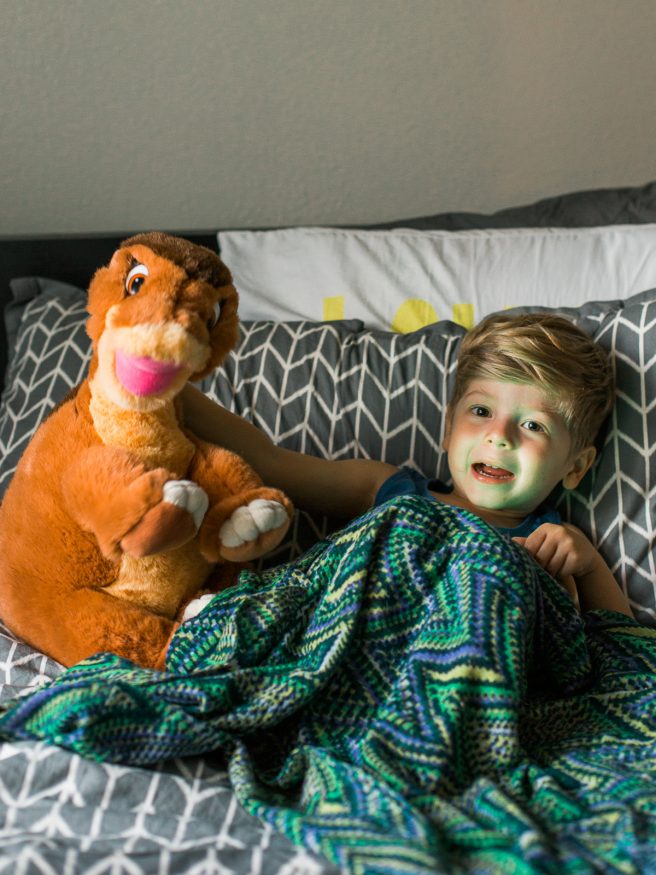 I got everything ready to make Zebra Popcorn. Which, by the by, is the most indulgent popcorn you could possibly have, smothered in dark and white chocolate, then I added a little something extra with caramel and chopped almonds just to make it that more gluttonous.

Because, hey it’s movie night and we’re all feeling like junk, and I wanted to cheer our little B Dogg up. 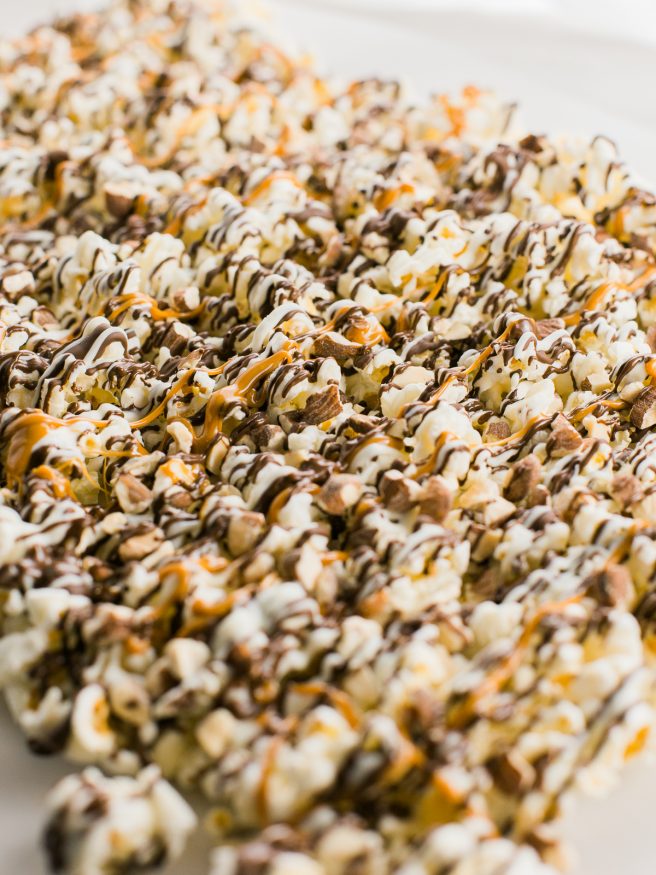 I used Pop Secret Homestyle flavored popcorn for my zebra popcorn recipe, because it has a nice touch of salt and butter that doesn’t fight the all the sweetness going on, but really compliments it well. It really hit the spot on a day yesterday where you really need some good food therapy. 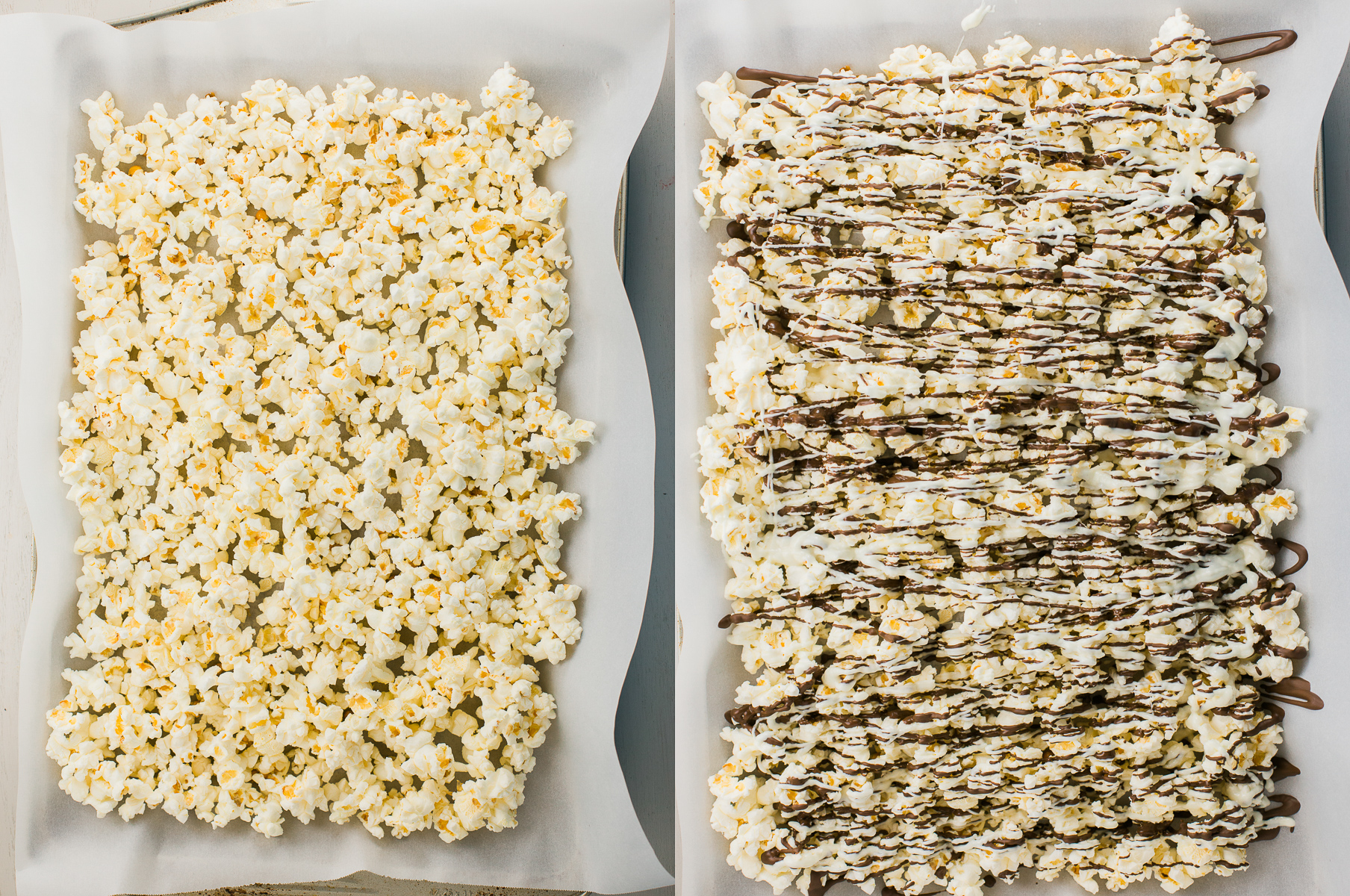 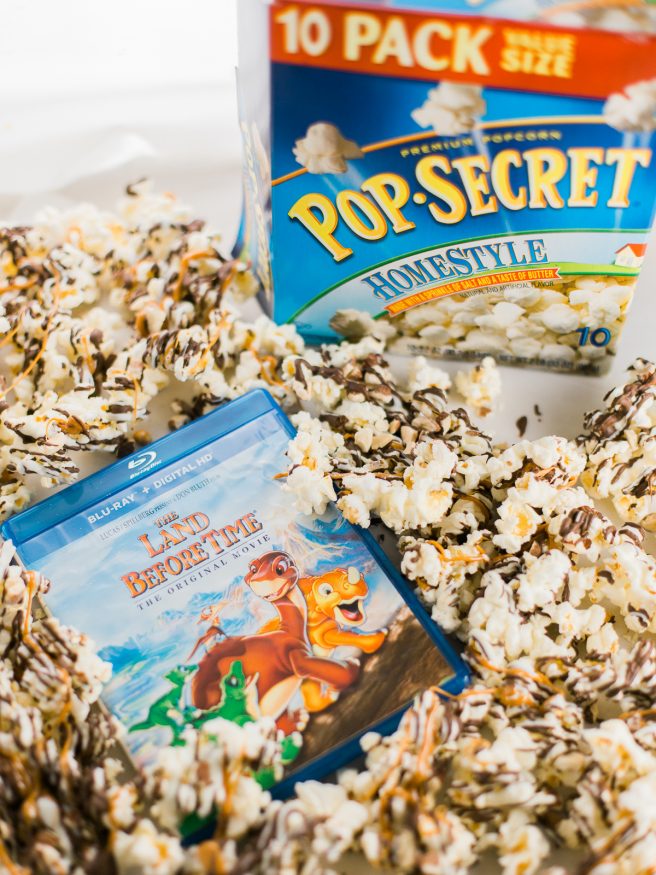 Earth shakes, tree stars, Sharp Tooth, Littlefoot’s mom (sniff). There’s just so much I love about The Land Before Time. Even watching it yesterday brings me back to rainy days in elementary school.

This was easily the one movie all the kids were hoping would come on when that cart with a 23 inch CRT strapped down (if you lived in earthquake areas like I did) was turned on and the blue screen goes away to reveal that old school FBI warning.

I can still remember the first preview. It was a pizza commercial with Wang Chung playing. I’m betting I just hit some major nostalgia on you parents right now haven’t I? 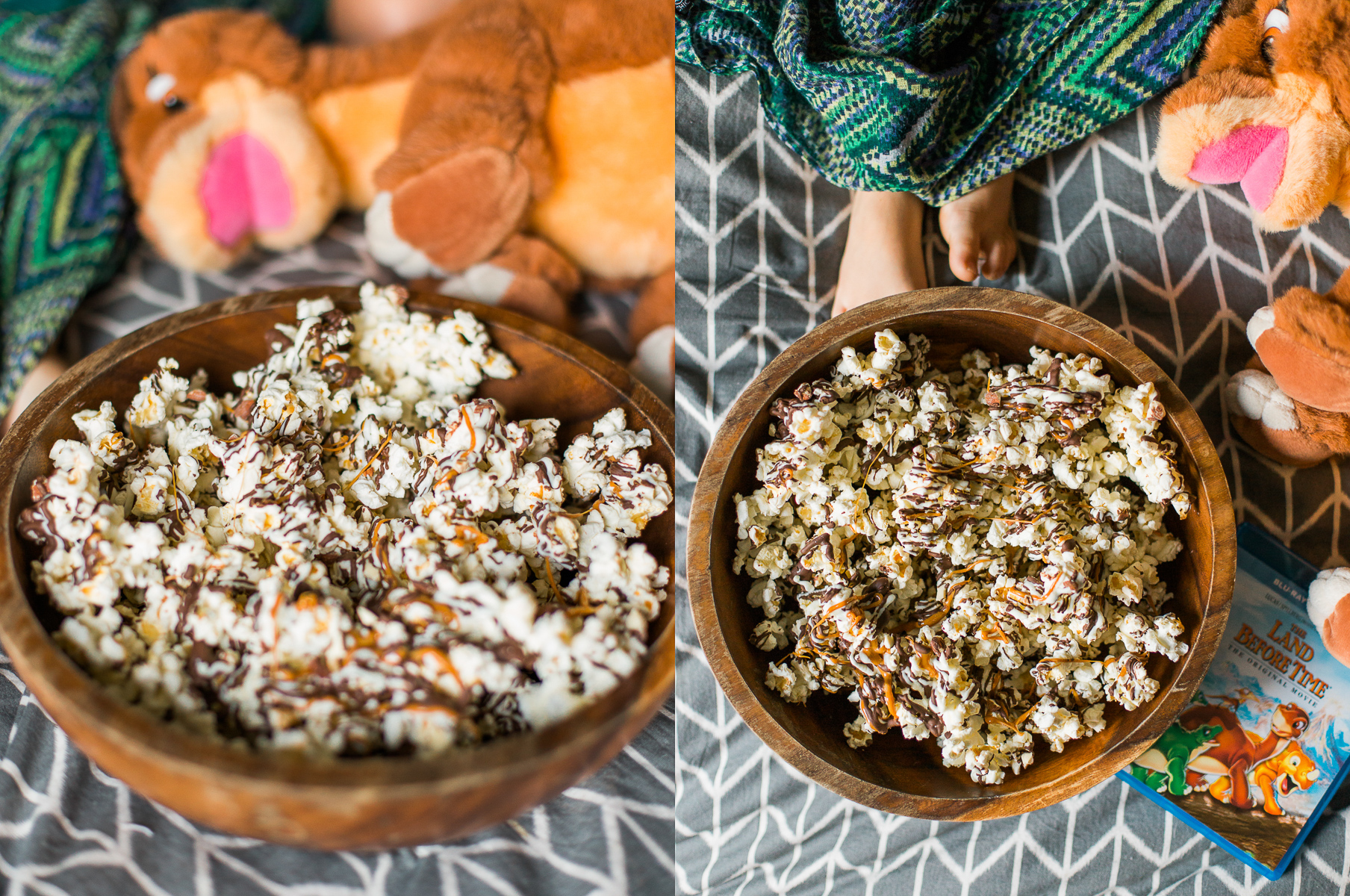 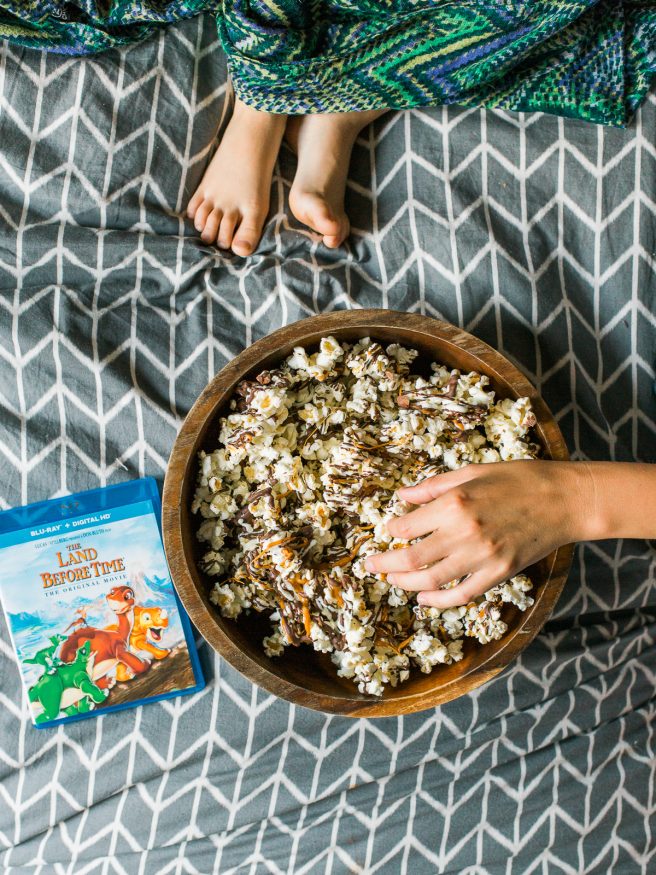 The Land Before Time was always a tear jerker, not that I ever got too emotional as a child, but I always remember the girls getting upset when Littlefoot’s Mom [SPOILER ALERT!] dies. But now that I’m a parent, and that my mom has passed on, theres a couple scenes that really get me in the feels now!

Like the scene when Littlefoot thinks he sees his mother off in the distance but it ends up just being his shadow?! Ugh, gets my allergies going every time! 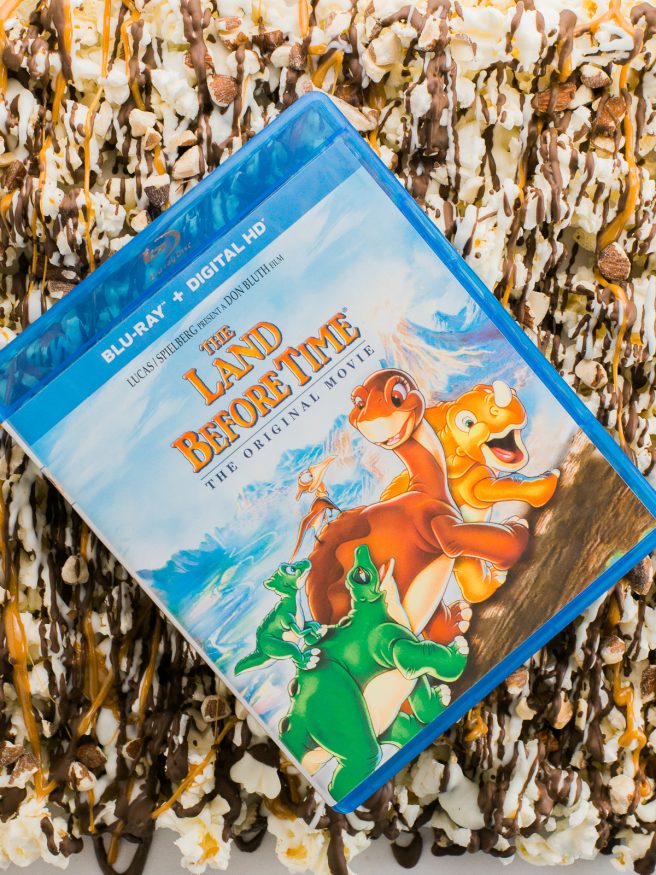 So we ate our zebra popcorn, watched The Land Before Time, and Brayden snuggled with Littlefoot, until he decided that his medicine had finally won, then knocked out. 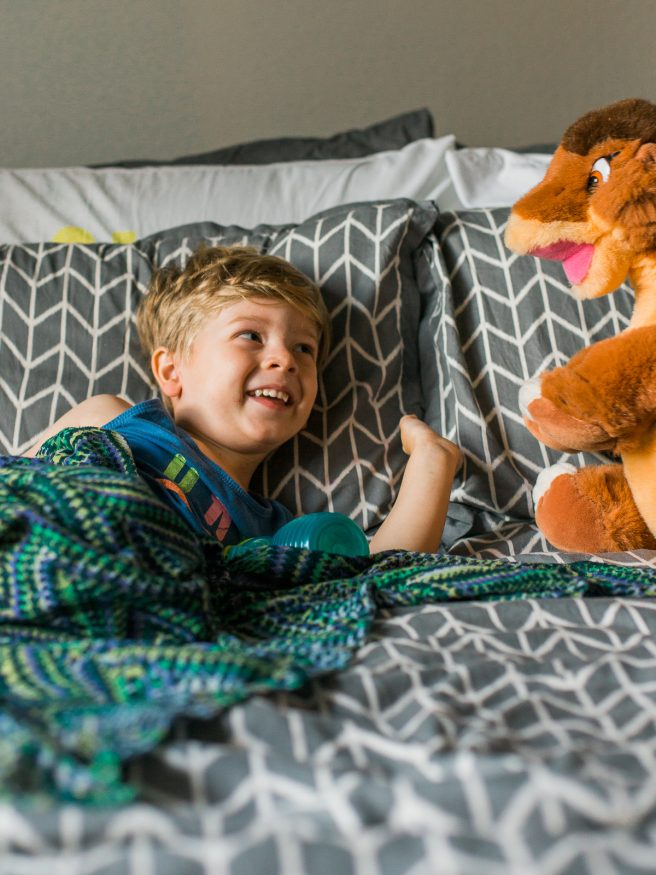 Ha! Yeah right. He stayed up the whole time. There’s nothing that keeps this kid down.

Well when he’s into a movie he usually doesn’t pass out unless he’s exhausted. Like many other toddlers his age he’s also way into dinosaurs right now, so this movie grabbed his attention REAL quick!

I’m sure now we’re going to need to go grab The Land Before Time: The Complete Collection DVD since it’s on sale right now (while supplies last) at Walmart. 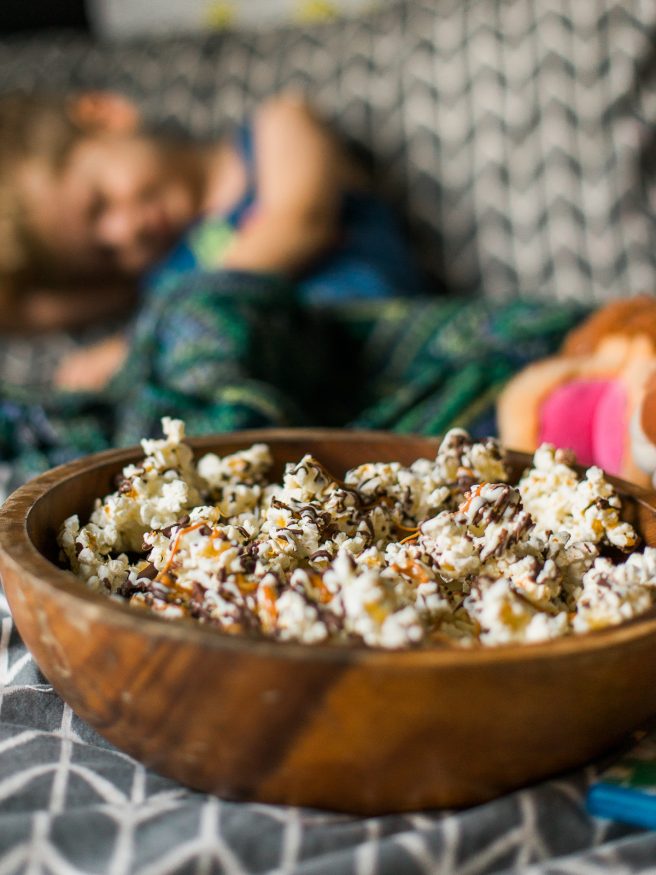 “This post is part of a social shopper marketing insight campaign with Pollinate Media Group® , Universal Studios Home Entertainment and Pop Secret, but all my opinions are my own. #pmedia #Pop4LandB4time http://my-disclosur.es/OBsstV”

Oh.. Before I Forget 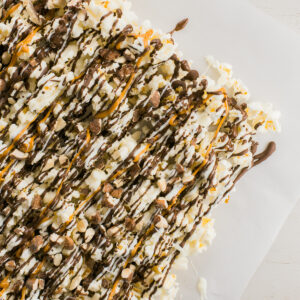 Zebra Popcorn And A Land Before Time Movie Night